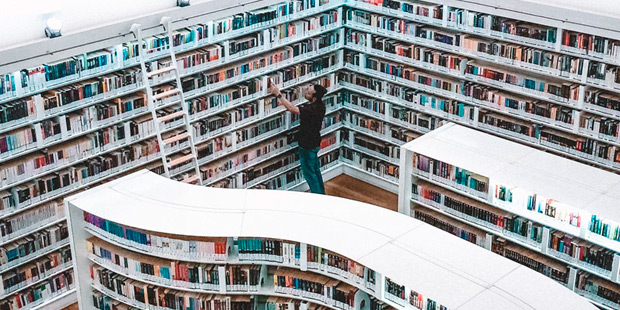 The past decade in book publishing has been a fascinating time for readers, retailers, authors, and publishers alike. The rise of digital, the self-publishing boom, and significant competition from other media products have all changed the landscape of the industry.

While publishers would always like to see every format increase and every book succeed, we’re in an industry of constant change. We’ve all seen articles that call out the death of reading and the demise of book publishing—you can find such articles dating back to the advent of television or video games—but this decade has shown that regardless of the obstacles, the need for and the love of reading don’t seem to be going away anytime soon.

For publishers, a large challenge in 2009 was increased competition for authors. Facing new tools for self-publishing and an increase of new nontraditional publishers, the industry had to better communicate the benefits of traditional publishing. The idea that “anyone can publish with the press of a button” was prevalent, but that didn’t fully capture the essence of the difference between traditional and self-publishing. Alongside this, the future of bookstores was called into question, especially given how quickly digital formats rose—and physical formats fell—in the first half of this decade.

The closest parallel to book publishing, at the time, was the music industry. The structure was similar (labels and publishers, musicians and authors) but the so-called digital boom had hit the music industry nearly a decade earlier. From 1999 to 2009, the revenue pool for music declined by 63 percent, according to RIAA and the U.S. Bureau of Economics. This statistic cast a shadow on the future of book publishing—but in some ways, it also helped our industry learn how to navigate its own struggles. 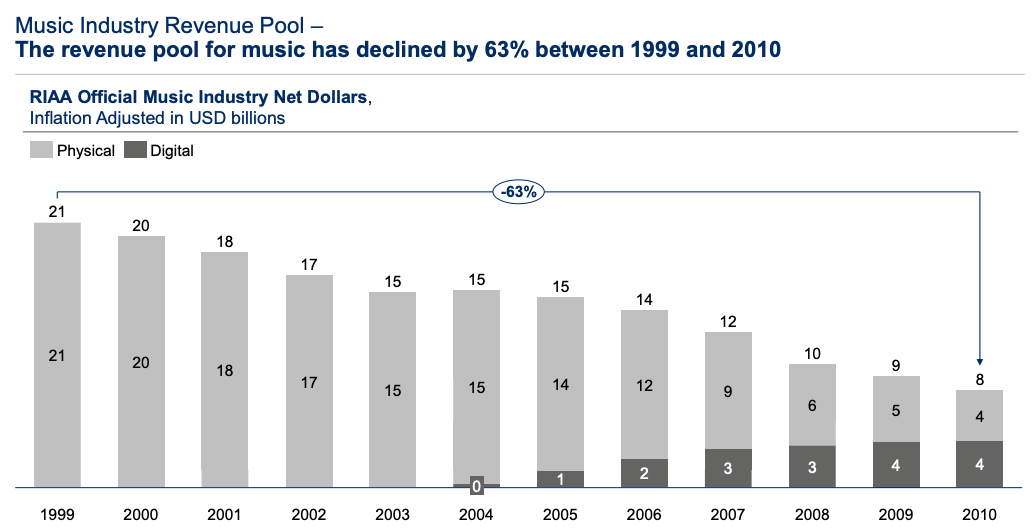 A Decade of Changes

1. A renewed push for book buying and reading

Since 2009, the state of publishing has been called into question year after year. Book publishers embraced digital formats—which brought even more questions about the future of the physical book—but after a few years, an interesting thing happened. As illustrated in the graph below, U.S. readers at the end of the decade spent roughly the same amount of money on recreational books as they had at the beginning.

Generally speaking, the same can be said for book reading. According to the Pew Research Center, in 2001, 185 million people had read at least one recreational book in the previous year, compared to 187 million (+2M) in 2018. Numbers continue to hold steady even as you break the total down into heavy readers and light readers. To put it simply: despite great competition from the changing media landscape, the overall amount of readers in the United States has remained close to steady.

In a recent consumer study of U.S. households, parents were asked what forms of media they found to be most important to their child’s home life. As you can see in the graph below, books—specifically print books—are still considered to be (by far) the most important type of media in a parent’s home. 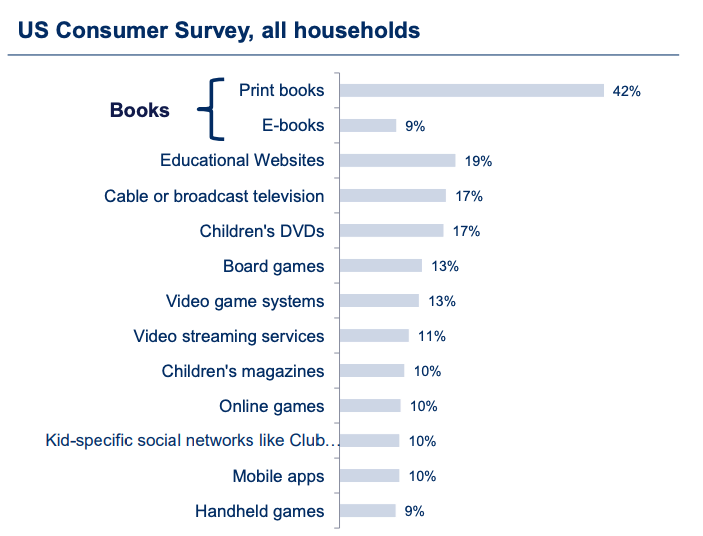 As children become teens, the importance of recreational reading stays with them, even as other media formats compete for attention. From 2006 to 2018, the number of print books sold annually in the juvenile categories grew from 160 to 247 million books (according to Bookscan), an increase of 46 percent. This boom is thanks in part to leading juvenile titles that become major media properties, from earlier titles such as the Harry Potter and Eragon series to major hits in the last five years, such as The Fault in Our Stars, Wonder, and others.

If you feel like there are more books out in the world than there were ten or twenty years ago, you’d be correct. With digital changes, upgrades in distribution, and the advent of self-publishing, the number of books in the marketplace increased—but these changes also greatly expanded the number of traditionally published books. The traditional publishing market has grown, not only in-house at PRH, but also for some of the small and medium presses available to authors.

The decade in publishing has been marked by an often unclear shift in how readers consume books. The novelty, convenience, and accessibility of ebooks allowed the format to flourish quickly. Take a look at the graph below—from 2008 to 2012, ebooks had an unprecedented rise in sales, paired with a less dramatic, but still evident, decline in all print editions. This caused many people in the industry to forecast the end of print books—but as has been clearly evident over the last five years, print and ebooks can coexist.

Ebooks exposed a need in the market, causing a shift similar to the one we’re seeing now with audio. Publishers are always looking for ways to engage the increasing number of people who say they read zero books per year for recreational purposes. With all the competing forms of media out there—from Netflix to podcasts, video games to social media—audiobooks meet new and current readers where they’re at, and Penguin Random House Audio is more than up for the task.

The U.S. print market has grown 12 percent since 2013, thanks in part to the growth of the adult nonfiction and juvenile categories. But even so, the market is not without its challenges. Television/film, music, and video games were more like reading: competitors with clear starting and stopping points. But now, streaming and endless social media feeds take up even more of potential readers’ time. Books, though, can be flexible—audiobooks can entertain you on a commute, and physical books can stick with you when you want to take a break from social media and the digital world.

This new digital age has also created opportunities for readers to find the books they want faster and more easily. Using tools from review sites like Goodreads to recommendation engines on retailer sites to online book sales and recommendations from local booksellers, booksellers and publishers continue to find innovative new ways to get the right books into the hands of the right readers.

The State of the eBook

Recent reports suggest that eBook growth has plateaued and millennials haven’t been adopting digital reading at the same rate as their parents. Are eBooks still the future? We sat down with...