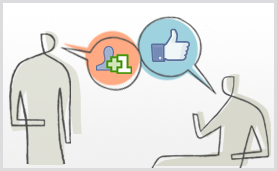 In the early days of social media, much of the focus was on increasing the size of your community. People would boast about their hundreds or thousands of followers and fans. However, it’s become increasingly clear that it’s actually engagement— the quality of interactions—that matters most.

Engagement is the cornerstone of any successful social media strategy. Engaged fans comment more, share more, and are more likely to tell their friends about brands they like. One helpful measure of engagement is Facebook’s “People Talking About This” (PTAT) metric, which is public information about a Facebook Page. Actions that count towards a Page’s PTAT score include people Liking something on the Page, commenting, tagging the Page in their posts, or answering a question you’ve asked. Our Facebook reps have told us that a good benchmark is a PTAT percentage of 3 or higher (total “talking about this”/ Facebook Likes).

Here are some ways to increase engagement on your social media platforms:

People are more likely to share content online when that content taps into their emotions, both positive and negative. Awe, anger, humor, and anxiety are all engagement triggers—more so than boredom or sadness. People want to feel a sense of belonging and share their opinions. We’ve experienced this effect on our own Random House social media accounts, which is one reason we focus on the reading experience in general, as noted in this article from WaveMetrix. Sharing photos and quotes are two great ways to evoke specific emotions.

Why Not Ask a Question?

Simply asking questions in your posts is an effective way to create engagement, as people feel compelled to respond.

These can be outright questions or take the form of fill-in-the-blank statements. Examples include:

When asking a question on Twitter, create a hashtag to collect the answers and promote dialogue among followers. Shorter questions are better for this platform because you’ll need room for the hashtag and retweets. Questions can be longer on Facebook, but try to still keep them brief.

Polls work somewhat like questions, but make it even easier for people to answer. While it’s difficult to do polls on Twitter, Facebook’s “Question” feature makes polls great newsfeed content for owners of Groups or Pages. Keep poll options to three or four, and let people add their own. Examples of poll questions include:

Ways to Give Away

Giveaways both engage fans and acquire new ones. When hosting a giveaway, determine the main focus. For example, on Twitter, the goal could be gaining new followers or asking for retweets. Make sure to include a hashtag to easily view entries. Announce winners in a tweet and ask them to direct message you their addresses. (But make sure you’re following the winners on Twitter, otherwise they will be unable to send you direct messages.)

Giveaways on Facebook are slightly more involved than giveaways on Twitter and require the use of a third party vendor. Facebook’s policy states that giveaways cannot be hosted on a Facebook Wall, nor can fans be required to comment on or Like a status update in order to enter a giveaway. All contests must happen through a Facebook tab. However, there are several vendors that help simplify this process. Here are two we have worked with:

ShortStack: This vendor has affordable pricing that ranges from $0 to $300 per month. Their iFrame tab designing tool allows you to create custom Facebook tabs using a variety of widgets, including sweepstakes, coupons, videos, calendars, and more.

Tabsite: Another vendor with affordable pricing, Tabsite has an easy platform with drag and drop toolbars. Pricing ranges from $0 to $30 per month. Custom tabs can be created with various widgets and multiple tabs can be added in one place. Tabsite does not include widgets for polls or quizzes.

A number of websites can spark inspiration for content. Current events, little-known facts, fun images— all can be used to create engaging questions, polls, or giveaways. Some of our favorite book-related content sources include Flavorwire, HuffPost Books, and StumbleUpon.

Frequently Asked Question: Should I Start My Own Author Newsletter?

As the Penguin Random House “News for Authors” newsletter begins its eighth year, one frequently asked question from authors has become increasingly relevant: “Should I have an author newsletter,...

Authors who use Instagram are uniquely positioned to engage and interact with their followers in more ways than ever. In addition to racking up “likes” on posts and connecting via comments,...