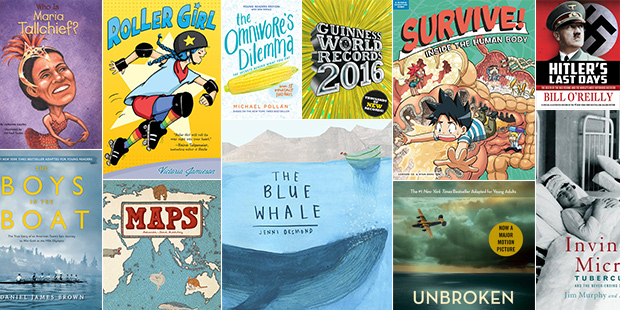 Moment of Truth: Trends in Nonfiction for Young Readers

The last couple of years have seen increasing growth and interest in nonfiction for young readers, driven by the Common Core State Standards and publishing innovation. We talked to booksellers, librarians, and experts to get their perspective on trends in this increasingly vibrant section of the book market.

From Guinness World Records to National Geographic’s Weird But True series, nonfiction has always had a place in the hearts of fact-loving kids and teens. Many children find these image-rich books, replete with bite-sized chunks of text, both fascinating and easy to digest.

However, adoption of the Common Core State Standards by many states has cast a new spotlight on nonfiction. Common Core Standards expect children to become adept at reading informational texts, and have heavily encouraged teachers to introduce more nonfiction into the classroom. Even states that have not adopted Common Core are seeing increased interest in nonfiction.

Suzanna Hermans of Oblong Books & Music in Rhinebeck, New York, sees an impact both inside and outside the school gates: “Common Core has raised awareness of kids’ nonfiction. We are seeing parents and teachers talking about it differently in home and at school.”  Sharon Grover, head of youth services at Hedberg Public Library in Janesville, Wisconsin, adds: “Nonfiction has really improved in recent years. Books are more readable, with more pictures and less straight recitation of facts. Kids really appreciate that, since they have become used to reading websites and apps.”

In response to these trends, libraries and bookstores are expanding their sections focusing on nonfiction for young readers, and making it easier to find. Becky Anderson of Anderson’s Bookshop in Illinois says, “We are doing more nonfiction displays in-store and taking every opportunity to talk to parents about it. When we create grade-level reading lists, we love to pair fiction and nonfiction books. For example, we recommend Breathing Room, a novel about a child with tuberculosis in the 1940s, alongside Invincible Microbe, which talks about the discovery and treatment of the disease.”

Kristy Raffensberger, children’s librarian at New York Public Library’s Hudson Park Branch, says: “We’ve started shelving some books outside the general nonfiction section so they can more easily be discovered. For example, we place easy readers and graphic formats with their fiction counterparts.”

Although nonfiction has always had a place on awards lists, the relatively new addition of specialist nonfiction awards, such as the YALSA Award for Excellence in Nonfiction and the Robert F. Sibert Informational Book Medal, has also helped increase awareness of top titles. Becky Anderson notes: “For a long time, we’ve had a Mock Newbery initiative where kids read and vote on twenty-five potentially medal-winning books. We now do the same for the Sibert.”

Another interesting trend has been the introduction of graphic novel–style formats to subjects such as history, science, biography, and memoir. Teri Lesesne, library science professor at Sam Houston State University in Huntsville, Texas, tells us: “The use of graphic formats, even manga, is an incredible move forward for kids’ nonfiction. Series like Survive! Inside the Human Body  or Howtoons take nonfiction from a flat textbook into a visually attractive format that reads like fiction.”

Meghan Goel of BookPeople in Austin, Texas, adds: “Initially people viewed graphic novels as ‘book candy,’ but librarians saw a legitimate place for them as a way to build readers who were struggling to engage with other books. New graphic memoirs such as Smile, Roller Girl, and El Deafo are so great that they appeal to both reluctant and avid readers.”

Bookstores in particular have been excited to see more illustrated nonfiction picture books. Suzanna Hermans notes: “In the last couple of years, we’ve seen some gorgeous, oversized, illustrated nonfiction titles, such as Maps and Animalium. We are able to sell these art-heavy, informative books across all age groups, even to adults.” Meghan Goel adds: “We have created more space in the store to feature these new, beautifully illustrated titles. Favorites include Water Is Water, The Blue Whale, and Mesmerized.”

Authors and publishers have increasingly been adapting adult titles for young adult readers, with examples including The Boys in the Boat, The Omnivore’s Dilemma, and Hitler’s Last Days.

Kari Riedel from kids’ reading community Bookopolis says: “Adaptations such as Unbroken or The Boys in the Boat are popular with teachers for class-wide book reviews. Kids do enjoy them, although they are more likely to recommend Minecraft or Weird But True books to each other.”

Suzanna Hermans notes, “Adapting adult books for kids is challenging, as the story has to be really compelling to appeal. In general, there is great appetite for YA nonfiction, and not enough available yet.”

Teri Lesesne has been excited to see biographies and memoirs broadening in range: “It has been great to see more diverse and international subjects, for example in the popular Who Was series, or books by Susan Campbell Bartoletti.”

Meghan Goel adds: “We have a lot of interest in our global section, which celebrates many countries’ cultural heritage. We’d like to see more books like Same, Same but Different because it’s important that kids explore other places and points of view in order to prepare them for the world.”

Clearly, the future is bright for nonfiction for young readers. Melissa Taylor, contributor to kids’ reading site Brightly, sums it up nicely: “Kids need to read and comprehend both fiction and nonfiction, whether or not Common Core exists and mandates it. What’s most thrilling for me, as an educator and a mom, is to see the huge increase in high-quality nonfiction for early readers. Now our choices are many, with more titles published every month.”

On the Rise: Graphic Novels for Young Readers

A lot has changed in the relationship between graphic novels and librarians or educators over the past decade. The Penguin Random House Library Marketing team is excited to report on the growth...

As the end of 2019 approaches, we take a look back at major trends that resonated with readers this year. Keep reading to learn about some of the biggest PRH sales trends of 2019.   1)...