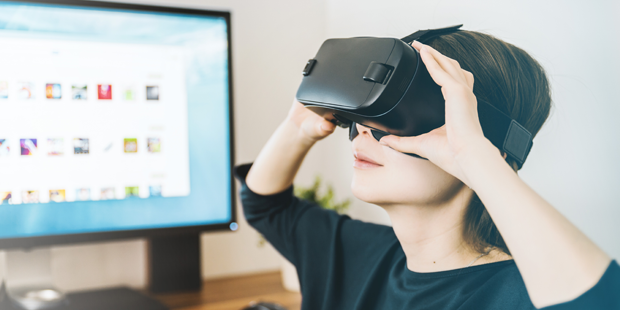 Emerging technologies from chatbots to voice assistants are changing every aspect of our lives. As consumers embrace new tech, many industries, including book publishing, are using these mediums to connect with existing and new audiences. Continue reading to learn about the current tech landscape and some of the realistic applications and limitations of new technology in book publishing. Also learn how Penguin Random House is exploring chatbots, voice activation, and virtual reality as tools to reach readers.

In 2017, the average U.S. adult spent 2 hours and 51 minutes per day on a device—not including time spent on email. The amount of time we’re “plugged in” is expected to continue to increase as digital advancements simplify daily tasks and provide new forms of entertainment. Two rapidly growing technologies are causing companies to revisit their relationships with consumers: voice and chatbots.

Digital assistants (Siri and Cortana) and smart home devices (Amazon’s Echo and Google Home) and chatbots are changing the ways people shop and obtain information. In 2017 there were nearly 450 million voice-controlled devices in use in the United States across all platforms. By 2020, this number is projected to grow to 870 million. Common tasks currently carried out using voice include online searches, checking news headlines, obtaining information on products, and home management tasks, among others.

In the past few years, companies have begun to use chatbots as engagement tools. According to research, 45 percent of end users prefer chatbots as their main source of customer-service communications. LinkedIn dispenses conversational career advice on its site, the Starbucks app lets you order coffee on the go, and Penguin Random House shares book recommendations on Facebook Messenger, just to name a few examples. The global chatbot market is estimated to reach $1.23 billion in 2025.

In March 2018, Read It Forward, the Penguin Random House site that helps readers discover exciting new books and classic reads, introduced a chatbot that recommends titles using a conversational interface on Facebook. The idea was pitched by a Penguin Random House employee and developed as a pilot project.

The Read It Forward Book Recs bot can be accessed via Facebook Messenger and on the site’s Facebook page (click on “send message”) on desktop or mobile. The bot was designed to present users with several paths for book selection, which include recommendations based on a reader’s favorite authors, books, or genres. Once they receive a recommendation, a users is invited to read a summary of the book, learn more about it on penguinrandomhouse.com, add the book to a Goodreads shelf, or share the recommendation with a friend.

Did you know that you can play Mad Libs on Amazon’s Echo and Google Home? With the rise of smart home devices, companies like Amazon and Google have become interested in adding new capabilities and content to these devices. Penguin Young Readers, publisher of Mad Libs, was one of the early brands with a major presence on these platforms.

The team from Penguin Young Readers was excited to experiment, and worked with developers and engineers to bring its classic word game to life on the Echo and Google Home. At this time, Mad Libs is available on both devices, raising awareness for the Mad Libs brand, its apps, and its line of books. Developing a voice-activated Mad Libs game has helped to start a conversation about the types of content that could have a future on these platforms.

When creating a marketing plan for Lincoln in the Bardo by George Saunders, the team at Random House wanted elements of the campaign to be as innovative as the book. After exploring a variety of ideas, they connected with a producer who was a fan of Saunders and set out to create a  virtual reality experience from the book. The marketing team worked with The New York Times, which at the time was eager to create content for its VR app, and they were able to make this a reality.

The result was a ten-minute videothat transports viewers to a powerful scene from the book, in which former president Abraham Lincoln visits the cemetery to cradle the body of his deceased son. The VR experience was released when the book went on sale. The video was shown on the Google Cardboard at author appearances, and actors from the film also performed live readings at special events. The successful VR experience resulted in extensive media buzz and promotion tied to the collaboration, which was an overall boost to the book’s campaign.

The landscape of technology in publishing continues to evolve, and we strive to grow along with it. Along with others in the industry, we will continue to utilize emerging technologies to promote our authors and books, and to experiment with storytelling on new platforms and products.

The Role of Voice Technology in the Publishing Industry

The explosive rise of smart speakers in recent years has been fascinating to watch—and to listen to. In this article, we’ll highlight the recent history of voice technology and take a look...

The State of the Book App

With more than 1.5 million apps available in Apple’s App Store, the business of book apps is a competitive landscape. We spoke with Katherine McCahill, senior director of digital development,...