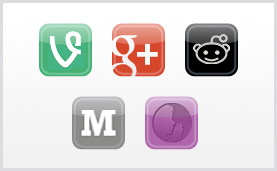 With new social networks popping up faster than you can say Pinterest, it’s important to know which ones are worth your time and will give you maximum return on investment. By now, you’ve mastered the art of the tweet and figured out the new Facebook Timeline. However, just how much do you know about Google +, Vine, Reddit, and emerging platforms such as Medium and Whisper? Here’s the scoop on these networks, along with some pointers and things to take into consideration before joining the social media bandwagon.

Google + is the second largest social network after Facebook, with over 500 million users. The network offers a unique approach to online sharing, using Circles and Communities based around common interests. While the platform boasts a high number of users, engagement and activity among members remain low—roughly three minutes spent per user per month. Google is turning this around by hosting Hangouts (video chats) with notable figures such as President Obama and even hosting a digital book signing with Toni Morrison. Marketers at Random House utilize Google + to boost search engine ranks and add author photos to search results.

Google + Tip: Boost your search rank by connecting a Google+ profile to your blog, website, or articles. Duplicate content from Facebook—it’s highly unlikely that a person avidly uses both platforms.

Just six months old, Vine is Twitter’s six-second video app. This new platform is quickly gaining followers and earned the number one spot in Apple’s U.S. App Store in April. Vine is a great way to visually connect with an audience. It’s best used for sharing brief visual content such as review snippets, writing rituals, or stop-motion animation—the creative possibilities are endless. Before brushing up on your video skills, take into account that Vine is fairly new and its activity and engagement are not high in comparison to other established platforms.

Vine Tip: Sketch what you want to do before you do it. You only have six seconds! Find and follow others who are doing things you like on the platform.

Self-described as the “front page of the Internet,” Reddit is a social news and entertainment website where registered users submit content in the form of either a link or a self-post. Other users then vote the submission “up” or “down”; these votes are used to rank the post and determine its position on the site’s pages and front page. Reddit has something for everyone, covering over 67,000 subject areas on pages known as subreddits. Of particular interest to the publishing community are Reddit Books and Reddit Authors. A popular feature on Reddit is Ask Me Anything (AMA), a live forum where fans can pose every type of question to participants. Random House authors that have recently participated in AMAs include Chuck Palahniuk and Rich Roll. Reddit may not be the ideal place to self-promote; however, it does offer the opportunity to connect with people interested in books.

Reddit Tip: Become part of their community! Create a profile and respond to book recommendations and book-related content in general.

This new blogging platform is the brainchild of Ev Williams and Biz Stone, former Blogger and Twitter employees. Medium describes itself as “a place where you can find and share knowledge, ideas, and stories—specifically, ones that need more than 140 characters and are not just for your friends.” At the heart of Medium are blog posts written by the platform’s members, which appear on the site’s “collection” and homepage. As with Reddit, users vote to determine a post’s prominence.  We like the site’s clean design and feel it stands a chance, based on the track record of its founders. On the down side, not everyone can contribute to Medium—the public can read and vote for content, but contributors need an invitation from the site’s curators.

Whisper is a secret social network that has gone viral across college campuses nationwide. The iPhone app allows users to anonymously post “secrets”—known as whispers—that appear as on online postcards to which others can also anonymously respond. Whisper saw more than a billion page views on the app last month, and has about 800,000 private messages sent each day. The app also raised $3 million from investors. We’ll be watching closely to see if Whisper is more than a passing fad—and if the platform loosens its rules to allow marketing, since the format is perfect for teasers and building buzz.

Factors to consider before adopting a new social media platform:

How to Do Medium Well

Authors are a natural fit for Medium. Medium’s book collection, Biblio, has a sizeable following, reflecting an interest in bookish content; authors are active on the platform; and Medium recently...

Ask Me Anything: How Authors Can Interact with Readers on a Variety of Platforms

Social media offers plenty of ways to interact with your readers. But one special way to build engagement with readers—whether they’re lifelong fans or have never before picked up one of...