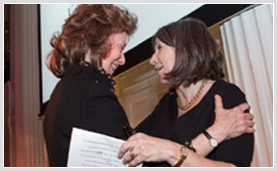 Award-winning author Anna Quindlen describes the start of the editing process with Kate Medina, in this touching tribute to the special relationship between author and editor. (Adapted from a speech Anna gave introducing Kate as the recipient  of the 2014 Poets & Writers Editor’s Award.)

When we first met, I told Kate that what I wanted was someone who would truly edit my work. And I really meant it, in the way you mean it when you say you plan to eat healthily. Except that, just as there is also that part of you that wants to have a Cinnabon at the airport, there is that part of every writer that wants to hand in a first draft and have the word come back: it’s perfect just as it is.

Instead, when I hand in a first draft to Kate, what comes back is the Enormous Envelope. I like to think that many of you in this room have also gotten the Enormous Envelope—okay, maybe not Doctorow, but many of Kate’s other writers here tonight. Inside is a cover letter, single-spaced, usually five or six pages long, detailing what needs to be done. There’s also a far longer memo that breaks all of this down more specifically, chapter by chapter. Then there is the manuscript itself: corrections, annotations, entire pages with a slash of pencil through them—delete. The beginning is especially scary, the confident black of the typed word haunted by the gray ghosts of pencil scrawl.

When I first met Kate, she told me she should have a needlepoint pillow in her office with the motto “The First Fifty Pages Will Always Need to Be Rewritten.” She seems to have stuck by that, at least in my case.

The conventional wisdom today is that no one edits anymore, and when the Enormous Envelope arrives I sometimes wish that that were so. But never for long. Because the truth is that every book I have produced has become materially better because of Kate Medina. She sees my work clearly from the outside, in a way that is simply impossible for me from deep inside it. After all these years, she speaks fluent Quindlen as her second language (or, given her long list of distinguished writers, perhaps her fifth or sixth).

But I think when people say that no one edits, they mean more than the sharpened pencil. They think of Maxwell Perkins telling Scott Fitzgerald that his novel about Jay Gatsby is a wonder; persuading Hemingway to tone down the obscenities so his fiction could see the light of day. They think the editor who supports, who midwives, who cares deeply, has gone out of fashion. We are here—Isabel Wilkerson, Amy Bloom, Ethan Canin, Edgar Doctorow, Andrea Elliott, Jonathan Darman, Connie Schultz, David Ebershoff, Susannah Meadows, Alan Furst, Robin Black, Adrian LeBlanc, Marisha Pessl, and so so so many others in spirit—to say that that is not the case. Kate Medina lives, eats, sleeps, and breathes her books. The Enormous Envelope is full of suggestions. It is also always full of love and kindness and care. Writers’ egos are fragile things; Kate handles every one as though it were a soap bubble. And the bubble never bursts.

From the jacket to the flap copy to the display ad, even once the heavily annotated manuscript has given way to clean copy, our books have been silent partnerships with Kate Medina.

There are still great editors in publishing; I know this because, along with other writers in this room, I have been blessed with one. Kate and I, together, arrive at a place where that editing doesn’t show, where I’ve conveniently forgotten what was in that first draft and what appeared on the page later at Kate’s behest, where she tells me it’s perfect just as it is. It’s like invisible ink, what a great editor does; the notes fade, and all that is left feels as though it belongs to you alone. But we here tonight know the truth.

How Do You Know When You’re Done Writing?

At some point, every author has grappled with the question of how to know when you’re done writing your work-in-progress. From obsessing over the last few lines to getting lost in endless revisions,...

Behind the Scenes: Designing Your Book’s Interior

Nearly all books are still made of ink on paper, whether printed on a conventional offset press or the more recent digital presses. To paraphrase Gertrude Stein: a book is still a book is still...