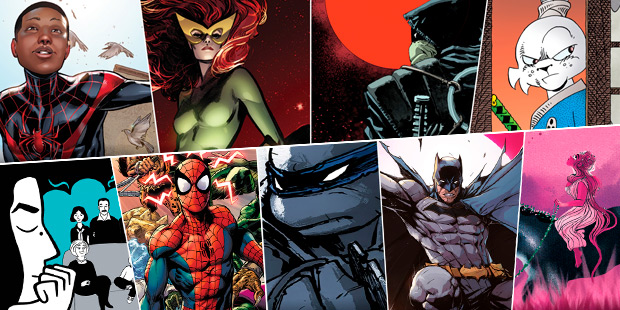 It’s no secret that manga and graphic novels have been growing in popularity year over year, and that growth doesn’t show any signs of stopping. Every week, fans visit their local comic shop to pick up the latest comics, learn the latest news, and engage with passionate retailers and fellow fans alike. In March 2021, Penguin Random House launched a dedicated sales team to service this dynamic market and work with these incredible retailers.

Since March 2021, the U.S. Comic Market Sales team has opened more than 1,500 new accounts, and they’ve seen sales increase just under 700 percent between 2018 and 2021. In the past year, Penguin Random House has also become the exclusive distributor into this unique market for comic books and graphic novels from Marvel and IDW Publishing, and launched a dedicated licensing imprint with Random House Worlds, making the team’s connection to local comic shops more important than ever.

While the hallmark of comic shops has always been the single-issue comic book, in recent years retailers have been looking to expand their offerings in other categories. Our Comic Market Sales team has been working with retailers to capitalize on the growing interest in manga, kids’ graphic novels, and pop culture gift titles. Here are some key trends in each of those categories that are worth calling attention to.

We can’t say it enough: Manga is more popular than ever! There has been a huge increase in titles licensed from overseas, giving fans access to a massive library. And manga is a medium that covers every genre, from intense action series like Attack on Titan to rom-coms like Wotakoi: Love Is Hard for Otaku and horror like Dissolving Classroom. Series are easy to jump into (just pick up the first volume!) and available for any age range, making them one of the most accessible comic formats around.

Anime (Japanese animation) is a driving force for many series—if a manga is popular enough to get an anime adaptation, that almost guarantees a sales boost for the manga. Thanks to streaming services investing heavily in anime, it’s easier than ever to discover new shows (and subsequently, the manga that they’re based on).

Graphic novels made for middle-grade readers have dominated the bestseller lists for years, thanks to popular authors like Raina Telgemeier and Dav Pilkey. Kids are eagerly looking for the next series to dig their teeth into. Stories that feature a healthy dose of humor and are centered around friendship, growing up, and adventure are sure to appeal to kids (and their parents!).  The Hilo series, PAWS: Gabby Gets It Together, and the upcoming Sweet Valley Twins series are all perfect for this audience. Graphic novels are also a great way to educate kids and encourage reluctant readers. We’re seeing more interest in nonfiction series like the Who HQ Graphic Novels from kids, parents, and educators.

We touched on this with manga, but media tie-ins are a growing trend in graphic novels and pop culture gift items as well. Fans are hungry for more of their favorite shows, from the latest Marvel series on Disney+ to the newest season of Stranger Things, and often seek out graphic novels and other giftable items to build out their collection.

The last few years have seen a renaissance for classic roleplaying games, which have never been more accessible to new players. With movies and streaming series for Dungeons and Dragons and Critical Role, along with the massive success of Magic: The Gathering and Minecraft, fans are eager to pick up everything that ties into their favorite games, including guidebooks, graphic novels, puzzles, and more.

As demand for kids’ graphic novels, manga, and pop culture titles continues to grow, the U.S. Comic Market Sales team is here to work hand-in-hand with comic shop retailers to grow their audience. Comics and pop culture are the vehicles for endless storytelling possibilities, and we can’t wait to see what fans are drawn to next.

On the Rise: Graphic Novels for Young Readers

A lot has changed in the relationship between graphic novels and librarians or educators over the past decade. The Penguin Random House Library Marketing team is excited to report on the growth...

Moment of Truth: Trends in Nonfiction for Young Readers

The last couple of years have seen increasing growth and interest in nonfiction for young readers, driven by the Common Core State Standards and publishing innovation. We talked to booksellers,...